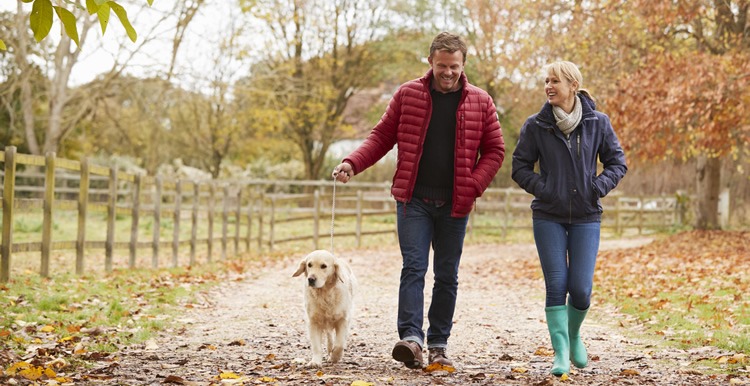 The effects of your stroke depend on the type of stroke, the part of the brain that was damaged and the amount of damage. 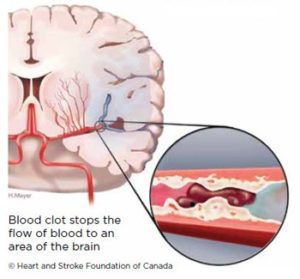 Most strokes are caused by a blockage or clot in a blood vessel in your brain. This is called ischemic stroke.

The blockage can be caused when a substance called plaque builds up on the inside wall of an artery. The blockage or clot grows as blood cells and fat cells stick to the plaque. Gradually, it grows big enough to block normal blood flow.

A transient ischemic attack (TIA) is caused by a small clot that briefly blocks an artery. It is sometimes called a mini-stroke or warning stroke. TIA symptoms might last only a few minutes or hours. No lasting damage occurs, but TIAs are an important warning that a more serious stroke may occur soon. They are a medical emergency — call 9-1-1. 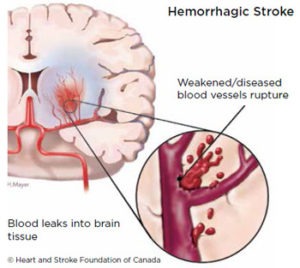 Hemorrhagic stroke is caused when an artery in the brain breaks open. The interrupted blood flow causes damage to your brain.

High blood pressure makes arteries weak over time. It is a major cause of hemorrhagic stroke. Weak spots in the arteries called aneurysms can stretch too far and eventually burst.

How can a stroke affect my body?

The effects of stroke are different for each person. They can be mild, moderate or severe. The severity depends on factors such as:

Heart and Stroke Foundation of Canada

One life is taken every seven minutes

For more than 60 years, Heart & Stroke has been dedicated to fighting heart disease and stroke. Our work has saved thousands of lives and improved the lives of millions of others. You’ll probably run into someone today who is alive and well thanks to the countless Canadians who have supported our cause with their time and donations.

It could be the young boy you pass on the street whose heart defect was successfully mended thanks to life-saving research. Or the woman at the coffee shop whose stroke was treated with a clot-busting drug. Or the father whose hockey teammates saved his life with CPR.

A Stroke happens when blood stops flowing to any part of your brain, damaging brain cells. The effects of a stroke depend on the part of the brain that was damaged and the amount of damage done.